The Top 100 Global Innovators report is the latest in an annual series that stretches back to 2011. In these reports, we seek to identify the most innovative organizations around the globe and to recognize and celebrate their contributions to providing new solutions to existing and unmet future challenges for the betterment of individual lives and society as a whole. 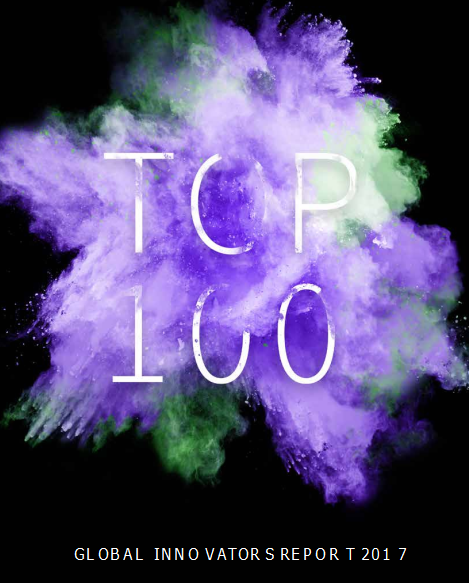 Comparing the number of inventions containing granted patents over the same period shows that, globally, there has been only a 3.4 percent increase from last year to this year. By contrast, for the Top 100, that increase is 5.7 percent.

The Top 100 Global Innovators have been more successful in obtaining full patent rights to their innovation than others. This could be due to a number of factors including drafting of higher quality applications, investing more in pre-filing searches or working harder to demonstrate the value of the innovation during the grant process. At any rate, improved success in obtaining granted patents is linked to higher quality innovation and shows that the quality of innovation coming from the innovation leaders is higher than the rest. It’s not how much you patent, it’s how good the innovation is. That comes from investing in the tools and processes that enable those filings to stand on their own.

6 Companies Are New Honorees of The Top 100 Global Innovators List Appearing For The First Time Since The Program Began.

Facebook showed a marked improvement in impact this year with a 44 percent increase in this metric over 2016. Average citations per invention over the last five years also rose 28 percent from 0.66 last year to 0.84 this year. Developments in full-screen, 360-degree video, and interactive ads for mobile and in e-commerce that allow users to complete transactions without leaving the platform have helped propel Facebook as one of the most innovative companies this year.

Fuji Electric has shown steady progress and growth in performance over the last seven years and has achieved sufficient growth, particularly in success and globalization metrics, to break through into the Top 100 for the first time this year. This is a tangible result of its open innovation program working with several Japanese Universities to promote joint research programs and internationally with the founding of research institutes in China, USA and Europe.

Hon Hai makes the list for the first time through improvements in both globalization and influence which indicates that it has been producing more impactful innovation over the last five years and is looking more internationally to protect its innovation in order to commercialize this more broadly. This is in line with its long-term research direction in key growth areas across the information technology sector, including telecommunications, consumer electronics, robotics and automation, optoelectronics and precision machinery, among others.

Molex extended the reach of its innovation this year as evidenced by a 45 percent growth in globalization this year compared to last year which sees it make the Top 100 for the first time. Recent innovation developments in the area of high-speed networking solutions such as its connected vehicle technology ecosystem with a new 10 Gbps automotive Ethernet backbone have borne fruit in Molex’s inclusion in the Top 100 list this year.

Nichia has consistently filed its innovation widely and been highly cited by others working in light-emitting-diode technology, but this year has seen an uptick in Nichia’s success in obtaining granted patent protection for its inventions resulting in its appearance in the list for the first time this year.

Western Digital has shown year on year growth in both globalization and impact to see it onto this year’s list. Western Digital’s investment in innovation has manifested itself this year in the recent announcement of the world’s first microwave-assisted magnetic recording (MAMR) HDD and advancements in micro actuation and Damascene recording head technology

The report is based on findings from patent data driven analysis using Clarivate Analytics proprietary data and analysis tools, including Derwent Innovation and Derwent World Patents Index, to execute a tried and trusted methodology which has been verified through market validation over the years. The methodology examines the portfolio strength and quality of each organization through assessing not just volume of patenting, but success in obtaining granted patents, breadth of filing of inventions and external citations to the portfolio to arrive at a combined indicator score which is used to identify the Top 100 most innovative organizations globally.

This year’s findings show that the Top 100 Global Innovators are truly an exclusive group which is at the cutting edge, with innovation of better quality and more global commercial potential and with more impact and influence in ongoing innovation than those organizations outside the club.

There is a significant shift towards Asia with 45 organizations from that region in the Top 100 this year compared to 39 last year, a 15% increase over last year. France maintains leadership again in Europe, although this has dropped from 10 organizations last year. China again appears on the list with a repeat honoree from last year, the telecoms multi-national, Huawei. 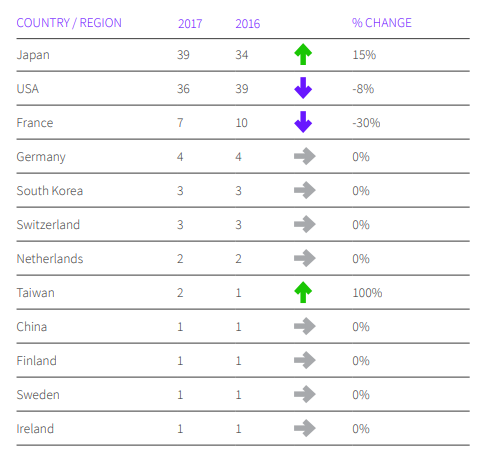 Hardware & Electronics takes top spot with 34 companies this year and also shows the largest increase in number of representatives up from 29 organizations last year. The companies listed in this sector include three of this year’s six Top 100 debutantes, Molex, Western Digital and Hon Hai. These top innovators are joined by the 27 companies from last year who are again recognized in 2017 and four previously recognized Top 100 innovators (Casio [2014, 2015], Furukawa Electric [2014, 2015], Texas Instruments [2012, 2013, 2014] and TDK [2012, 2013, 2014]). Two organizations from last year dropped off the list (Corning and MediaTek) due to, respectively, drops in impact and globalization performance this year. That Hardware & Electronics heads the list of industry sectors again this year is evidence of the growing importance and ubiquity of computing devices and infrastructure that pervades today’s world. From the internet of things (IoT), through cloud computing to the developments in Industry 4.0, much of the development in modern technology is computer hardware and electronics dependent. 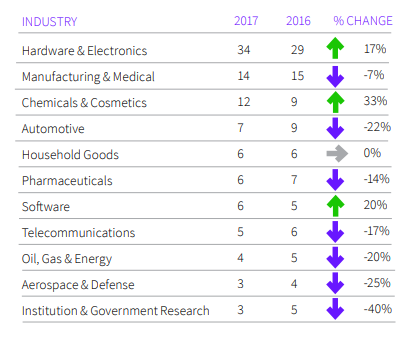 The 100 organizations that make up the 2017 Top 100 Global Innovators continue to show characteristics that separate them from the crowd and demonstrate the true value of investing in innovation as a means to build sustainable development. Looking globally, there has been an increase of 11.9 percent in the volume of new inventions published over the previous five years this year compared to last year. However, for the Top 100, that increase was only 2.4 percent. Top 100 innovators are filing less.

This is the detail of Top 100 Global Innovators : Download top 100 global innovators

October 30, 2018 No Comments
U.S. to Restrict Exports to Chinese Chipmaker…

April 25, 2018 No Comments
US chipmaker expands Taiwan workforce to counter…