At present, a paradigm shift, referred to frequently as Industry 4.0 – or Industrie 4.0 in Germany – is taking place. In international usage, terms like the (Industrial) Internet of Things, smart factory, or cyber physical (production) systems are often used interchangeably to refer to the same thing.

Industry 4.0 refers to the global trend toward the digitization and networking of the industrial value chain and its products.

The high profile of Industry 4.0, particularly in Germany, is not only in the world of business. Industry 4.0 is also driven by politics due to its economic impacts, such as further developing the competitiveness of German manufacturing.

In doing so, it is important for manufacturers to use the newest technologies for their own production process and, on the other, to put these technologies and products on the market.

From the lead supplier’s perspective, the consolidation between the information or communication technologies and the classical high tech approaches mostly serves the expansion of the production sector and its technologies.

In order to achieve this expansion, prerequisites owing to increasing market dynamics and market complexity will need to be met. From the manufacturing companies’ perspective, it is important to design intelligent technologies and products for new markets and to subsequently serve these markets. To meet the needs of suppliers and manufacturers, companies will need strategies that act on both perspectives. For example, companies from the semiconductor industry are good at employing these dual strategies.

Semiconductor manufacturers like Analog Devices are dealing with this complex concept to transform their own production lines into fully automated smart factories. In addition, these manufacturers provide innovative technologies to other companies within the manufacturing sector, which assist them in transforming their manufacturing facilities into smart factories. Thereby, an important role is given to small- and medium-sized enterprises, as they form the majority of Germany’s industrial enterprises (more than 98%).

What exactly the type of support can look like, the challenges semiconductor manufacturers are facing with, and what opportunities are resulting out of Industry 4.0? These questions are examined below.

Companies need to decide whether or not a transformation of their manufacturing facilities into smart factories implies meaningless effort or an actual increase in productivity with a corresponding reduction in costs.

To find answers to the following crucial questions, numerous studies have been carried out by a number of market research companies. They all came to the same conclusion: Industry 4.0 will provide added value for small- and medium-sized enterprises and they should take the related opportunities to consolidate the company’s success.

In particular for semiconductor manufacturers, the results of the studies can be classified into three fields: new technologies, new product offers, and new business models. All three fields together are covering the whole value chain of the production and its products – starting at the sensor node, via the cloud, and up to downstream services.

For the transformation into a smart factory, there is a mandatory need for intelligent and power-saving products, or rather completely autonomous systems that can be integrated into the existing production structure in a simple manner (like plug and play). These systems consist of various semiconductor devices and sensors, which are combined with analog and digital signal processing ICs. The value chain starts with these devices first of all, the sensors are responsible for gathering data from the real, physical world and afterward they have to transform and process the data within the digital realm (see Figure 1).

Market requirements will need to change as the value chain evolves. This is why semiconductor manufacturers have to adapt their own enterprise as well as their products to the reality of the smart factory. The technological trend is moving toward intelligent and energy-saving products, as well as integrated safety and security functions and energy harvesting abilities. How such a device or, rather, a complete system may look is shown in Figure 2, using the example of Analog Devices’ MEMS-based accelerometer, the ADXL356.

The ADXL356 is a low cost, low noise, 3-axis accelerometer that has a measurement range of up to ±40 g (FSR). This part’s key features are its extremely low offset drift and low power consumption. Due to its hermetically sealed package, the ADXL356 is particularly suitable for precise tilt measurements within harsh environmental conditions, for high resolution vibration measurements, and for high performance (long-time) measurements in low current or battery-operated wireless sensor networks, such as those used for structural health monitoring (SHM), attitude heading reference systems (AHRS), or various other applications with abrupt excessive forces.

The ADXL356 forms the basis of a system, which is extended by further functions: integrated signal processing through analog-to-digital converters, microcontrollers, and various analog and digital, partly isolated, or wireless interfaces that support communications standards like Ethernet, 6LpoWPAN, or ADRadioNet. The latter item is a communications standard developed by Analog Devices, which is characterized by its wireless, self-healing multihop communication protocol, and its high scalability and low memory consumption.

Furthermore, integrated encryption methods, such as AES-128 and AES-256, improve security against possible cyber attacks. Last but not least, functional safety plays an important role in the development process of these systems as this is also of importance in the context of the smart factory. 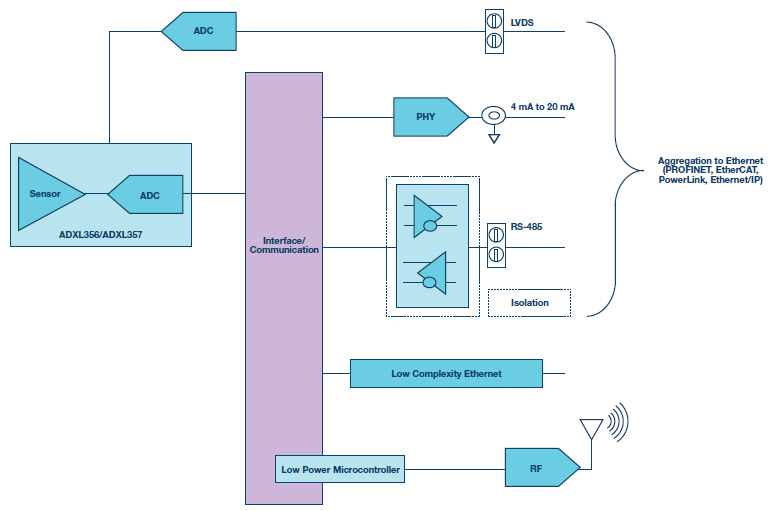 For semiconductor manufacturers, in the future it will not be enough only to extend their range of sensors and other semiconductor devices. To be perceived in the marketplace as a global player, and in order to exploit the full potential of Industry 4.0, their existing product range has to be expanded with communication and low power microprocessor technologies.

With this in mind, Analog Devices already has relevant solutions within its portfolio of products. For example, in the field of communications, there are multiple solutions with HART modems. These HART solutions are able to improve traditionally congested communication networks in quite a simple way by using existing infrastructure for their new power-saving technologies.

Market research has also revealed that small- and medium-sized enterprises want to have significant support from manufacturers and suppliers for a faster and more effective integration of new products into their systems. In this way, additional effort can be reduced for the enterprises and they can continue to focus on their core business. In particular, partnerships or cooperative efforts between the supplier and the enterprises are considered types of support.

Because of the many advantages of Industry 4.0, the question arises as to why many enterprises have not invested in their own smart factory by now?

One of the major obstacles to investment is the perceived nonbenefit of a smart factory and its associated costs. For example, calculating the rate on investment currently remains quite difficult due to a lack of monetary evaluation criteria. Semiconductor manufacturers therefore have to increase their customers’ awareness and provide educational material showing the advantages of smart factories and also in pointing out the value to be gained in investing in the same.

However, investments have to be made not only by small- and medium-sized enterprises who are interested in transforming their own facility into a smart factory. Providers of intelligent solutions like semiconductor manufacturers have to invest into their own product offers and possibly into required restructuring of their various business divisions. The investments are necessary for new technologies and business models, as well as for development and expansion of marketing activities, qualification measures, and sales management.

With the transformation of the production sector, again and again an important role is given to fields such as data and IT security. These topics are not just important requirements for a successful introduction of Industry 4.0. They have to be implemented into the digital systems consequently and continuously as critical acceptance and success factors.

It will be important for companies to set their fundamental strategic course at an early stage toward the implementation of Industry 4.0, to gather experience with the corresponding technologies. However, this process requires patience because many of the relevant technologies are not likely to exploit their full potential for five to 10 years or even longer. Thus, the implementation process of Industry 4.0 will take a long time. Moreover, because of the lack of a clear definition, there is no exact date by which Industry 4.0 will be completely implemented. Instead of talking about an industrial revolution, it may be more meaningful to use the term industrial evolution.

With the change of the production environment, new players and competitors will also appear or influence the market. Alliances will arise that will shape the image of production in a significant way. The future of the industry or of an enterprise will be determined by fewer and fewer within the factory hall. The software and services sector will also play a major role, because only linking and merging the virtual with the real world will ensure a great productive potential.

It is clear that for enterprises, the pace of current development is accelerating, and it will be hard for them to catch up if they miss the boat.

Accordingly, enterprises no longer believe Industry 4.0 is temporary hype. In the meantime, current market developments are showing clearly an irreversible trend toward Industry 4.0 and smart factories. The biggest question regarding missing standards, missing security, poor knowledge, etc. are becoming appreciably smaller. Furthermore, the confusion about the future of the production environment is decreasing as well.

In summary, Industry 4.0, the transformation toward smart factories, and its required technologies offer enormous potential for semiconductor manufacturers and their success.